I did what was right for me, and binned him

Things with Chris haven’t been going too well. After his cancelling on Thursday night, we arranged to go for a dog walk on Sunday. I haven’t been comfortable with some of the things he has been saying, wasn’t getting a good vibe and hoped that this was just his ‘text’ personality and in person he could be as lovely as I thought he was when I met him before.

But, on Saturday night during a text conversation, yet again he brought up his fetish. I found myself wondering why he kept bringing it up since I had already told him multiple times about how uncomfortable I felt talking about it. Yet again, I didn’t like the way he made me feel, so made my excuses and went to bed.

On Sunday morning, he text me to say he wasn’t feeling well and had to cancel. I was disappointed because in my head I had given him a final chance to rectify things, and he hadn’t taken it. Whether or not he was really ill I guess I will never know, but I told him to forget the whole thing. I don’t want to be with someone who makes me feel like that anyway. I have enough stress in my life, and am balancing enough plates already – I don’t want to add more to the mix. I haven’t heard from him since so I guess I made the right decision, and funnily enough don’t feel bad about it at all. My only reservation is that Valentines Day is on Thursday, and I know I will be sad and lonely. Although, I suppose it is no different to any other night really. I went back on to the internet dating website to have a browse.

This is really sad but I just want someone in my life who will love me. Facebook is the worst thing – I see all my friends from school getting engaged, getting pregnant, having children – and I feel left behind, and like I am going to be left on the shelf. I know I am only 25 but I also have in the back of my mind that the consultant told me once that the sooner I try for children the better (I have poly-cystic ovaries). Of course, I would not do it for that reason but I would love to have children, to bring someone up knowing they are loved and I would do anything for them.

I actually had quite a scary moment yesterday too. I have had a flat tyre for a little while and haven’t got it sorted – I’ve just been going to Tesco and filling it up with air as it is a slow puncture. I was going along the motorway to the mall (wanted to buy a couple of sports bras now I am doing more exercise!!) and thank god I was just trundling along in the slow lane at around 60mph as my tyre suddenly exploded. I remembered what my Dad had said to do it that happened so took both feet off the pedals, locked my arms and slowly steered the car into the hard shoulder. Someone was watching over me yesterday – I normally drive at 90mph down the fast lane – and I doubt very much if I would have been able to keep control of the car if it had happened when I was doing that. Luckily, I have RAC cover and the man was with me within about 30 mins. I am quite proud of the fact that I didn’t panic, I just calmly sat in my car, collected my thoughts and decided on a plan of action – call the RAC, then get out of the car and wait behind the barrier until he came. There would have been a time when I would have had a panic attack and not been able to anything to help myself.

In other news, I had my sunday morning weigh in and hadn’t lost anything at all. I’m guessing my ‘blip’ on Thursday probably contributed as I had been really good for the rest of the week. It always seems that no matter that I have managed to purge most of the binge, I still put on weight. I was upset to start with, but then Kim said something really useful to me – that the longer it takes to come off, the easier it will be to keep off. I am going to keep that in my head and hopefully I won’t mind so much if I am not losing as quickly as I am hoping to. My target is 11 stone 6 lbs by march 9th (Crufts) and a group of us are trying to meet our targets by then.

Last night I went to a spin class as I am trying to get ‘fit’ rather than ‘skinny’. It was HELL. The lady on the bike next to me was laughing at me – she said everyone is the same – they think they are quite fit until they go to spin. I actually thought I was going to die after 10 minutes, and the class lasted an hour!! It was torture, but I am not going to give up. I’m always going to add in Boxercise on a Thursday and see how that goes. It was a great atmosphere, the lights off, music up and disco lights flashing. 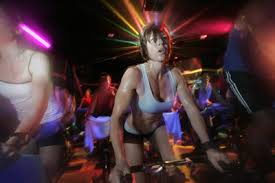 I’ve been recommended to try Body Combat but I can’t find a class near to me, which is a shame.

← A million steps back. *ED Trigger*
Determined not to be alone on valentines day? →