When finding yourself in a distressing situation, it can be a very useful skill to be able to accept the reality of that situation. In DBT terms, this is done through Radical Acceptance, Turning the Mind and Willingness . The word ‘radical’ means complete and total – which leads on to the fact that Radical Acceptance is the complete and total acceptance of your situation in you heart, mind, body and soul. Further to this, you do not fight the reality, you do not wonder why it has happened to you – you simply accept it as it is. In any situation, one might feel pain, but you will only feel suffering when you add pain and non-acceptance together. Being able to accept things will avoid the suffering, making the pain much more easy to swallow, don’t you think?

Important Note: Radically accepting something DOES NOT MEAN that you approve of it, it just means you are accepting the reality of it. That is where most people go wrong.

Another note: Radically accepting things also doesn’t mean you can’t change it. Change FOLLOWS acceptance – but accept first, before you attempt to change it.

The Acceptance of Reality can be broken down to three main parts:

An example from my own life:

“When I was 23 I started a relationship with a young man, who I thought I loved. The relationship was very intense and progressed quickly, and soon we were talking about moving in together. However there were small things that I kept noticing which made me feel uneasy. For a long time, I chose to ignore them, because I wanted my reality to be that he was my perfect man, and I was going to have the perfect life with him. I even thought to myself that things would be OK when we moved in together or perhaps it was my fault that he was acting that way and that it was ME that needed to change. It took me a long time to accept that things weren’t right, but when I finally did, I ended the relationship and felt as though a weight had been lifted.”

Example from DBT Self Help:

“So I’m going to give you an example. Imagine that there’s a child on a bicycle. And the child is on a hill, and the child is racing down the hill, really fast on his bicycle. And he goes into an intersection and coming the other direction is a car. And that car is driving, let’s say at the speed limit – that car’s not speeding.   But the intersection’s unmarked. There’s not a stop sign, there’s not a stop light and there’s not a yield sign. So we’re going to imagine the kid is racing down the hill. The car’s coming the other way and they meet up right in the middle of the intersection. The car hits the kid and the kid dies. If you say it should not have happened, I would say ‘well, it should have’.  There wasn’t a stop sign.  There wasn’t a stop light. There wasn’t a yield sign. The kid was going fast.  The car was going the speed limit. Something blocked the driver’s view. The child was a child. Children go fast. If you wanted to say that should not have happened, you would have to create causes for it not to happen.  You’d have to do something about all those causes. That’s an example of accepting reality as it is and accepting that reality has causes.  Now, do you think I approve of this?  Do you think you think I think it’s good?  Is acceptance saying it’s good that the child got hit by the car? No.  Is that what I want?  No. I were the child’s mother am I going to go on a campaign, get stops signs put there or make the speed limit lower? Yes. Will I teach my child not to race down hills?  I will certainly try. But, until the causes are different, that event should happen. It was caused.” 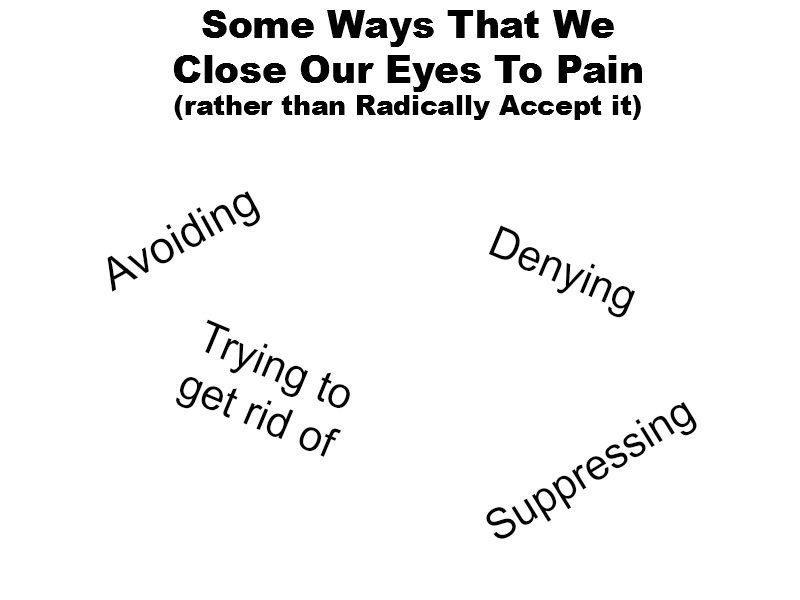 Using an example from Marsha Linehan:

“How about if we take an example. You get thrown in jail for a crime you didn’t commit.  You are innocent. And now it’s gone to the Supreme Court. And they didn’t overturn your conviction. So it’s looking like not only are you in jail… Let’s imagine you’re in there for something really serious so you’re in there for life.  What are your options? Well, you certainly can not solve that problem. You’re not going to get yourself out of jail. And to be honest, it just doesn’t seem to me it’s going to be possible that you’re going to start being happy that you’re an innocent person in jail.  So I think we’re going to rule that one out. So what are your options? Ok. You could be miserable, distraught, upset. You could cry every day for the rest of your life. Or, you could accept it and figure out a way to build a life worth living inside a prison.  To go from unendurable agony to endurable pain, you’re going to have to accept that you can build a life.  Because if you don’t accept it, what will happen?  You’re not going to build a life.  And building a life worth living actually takes a fair amount of work. Believing that you can’t do it makes it almost impossible.  Believing that you can do it makes it a lot easier, so the chances are a lot higher that you’ll actually do it – you’ll build a life worth living”

Radical Acceptance states that everything in life is AS IT SHOULD BE. What has happened that is traumatic might be painful, but it had a cause, even if you don’t know it yet.

Radical Acceptance can  be achieved by using the skill “turning your mind”. Unfortunately, Radical Acceptance is not something that can be done once, and then everything will be hunky-dory. It needs to be done over and over again to be effective. 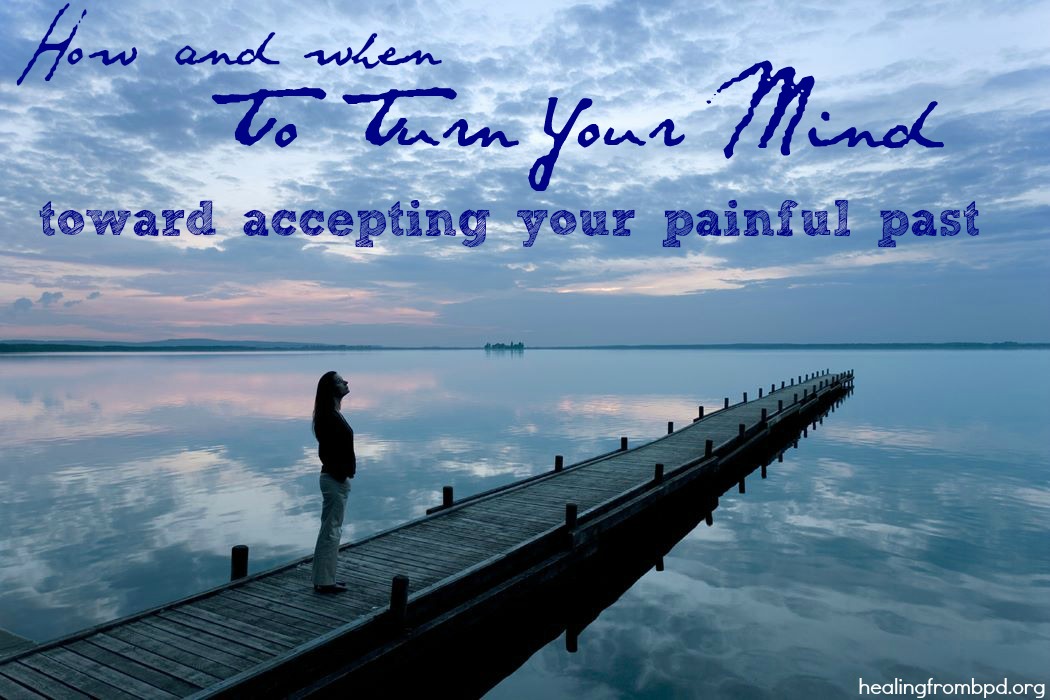 Turning the mind is the physical thought process of realising you are not accepting, and choosing to accept. Signs that you are not accepting including asking the question ‘Why me?’, feeling angry, bitter or vengeful. Other times you might ask yourself why something is happening, or try to block it out with distractions, or self destructive behaviours such as drinking alcohol, drug taking, self harming or suicide attempts.

*Radical Acceptance is particularly useful when in a situation where the distress is causing you to have self harm urges. By Radically Accepting the situation you can reduce the levels of distress and hopefully then deal with the urges appropriately rather than giving in to them.

You need to push yourself to choose acceptance every time. Accepting the reality of your life will eventually lead to emotional pain without the suffering, which makes it more tolerable. You should make an inner commitment to yourself that you are going to turn the non-acceptance to radical acceptance.

Example: You are waiting for your exam results, and when they arrive they are not what you expected, and you do not get the results you needed to get into university

The reality of the situation: The grades you have achieved are not good enough to get into university

These results can’t be right

These are my results

I tried my best

Change that can be accessed through accepting:

Applying to university through clearing (UCAS – it’s a UK thing)

Changing course/university to one which has lower requirements

Further revision on the parts you struggled with during the exam

As you can see, the sooner you accept the situation, the quicker you can do something to change it. The longer you spend challenging a situation and wondering ‘why you’, the longer time you will be suffering.

So bear with me on this one. DBT states that Willingness is the realisation that you are part of a ‘cosmic process’ and that you are willingly going to participate in that, and the rest of the world. This doesn’t really make sense to me, so I want to try and put it into my own words. I believe willingness is a state of mind, being open to everything coming your way, and being willing to continue participating in life whatever the situation, or however hard it may be. So, it makes sense that the ultimate opposite of willingness would be the act of committing suicide. Right? You still with me? That opposite is Wilfulness. Being unwilling or unable to make the best of your situation. Throwing your dolls out of the pram or having a tantrum.

Using an example from Marsha Linehan:

“So imagine you’re at a card game; you get your cards; other people get their cards. And one of the players gets mad about their cards, throws them down and says, ‘I don’t like my cards.  I want more cards.’  You say, ‘Well, those are the ones you got dealt.’ And they say, ‘I don’t care, it’s not fair!’  You say, ‘Well, those are your cards.’ ‘No! I’m not playing these cards.’ What would you think?  Would you want to play with that player?  Probably not. Who do you think is going to win at the card game? Well, it’s probably the person who plays the cards. That’s willingness. Throwing the cards down and walking out, that’s willfulness. Sitting back and saying, ‘I don’t care. Oh well, I got a bad hand.  Poor me.  Whatever.’  Just throwing any old card out. Willfulness. The idea when you’re playing a hand of cards is to play as skillfully as you can. That’s willingness.  It has everything to do with throwing yourself in to life.  Participating in a willing manner.”

Just as a last little note I wanted to mention about the half smile. Not many people know this but the muscles in our face are linked to the emotional part of our brain, so by smiling, we can actually heal ourselves emotionally.

Try the half smile – when you are feeling sad, smile a little (not a full blown grin, hence the name ‘half smile’ and see how you feel. I promise it works! The perfect example of a half smile, is the Mona Lisa.